Between the Internet, there’s Browser War first as the Internet can be only Run through a Browser but Browsers like Google Chrome are RAM suckers and slows down the whole process, so can we say that Brave Browser can be the new Best game leader for Internet surfing?

Does Brave Browser is so brave to give competition to its competitors like Google Chrome, Opera, Firefox, etc.?

To discuss further I have divided the Pointers for a better understanding between two and at the end, I try to give my suggestions.

Competition between Brave vs Chrome is fair as one is the Brower leader and second is the Fresher made on the same base.

Which one is Lighter (Chrome or Brave)?

Chrome’s setup size is 1.8MB but Brave’s size is 1.24MB, it doesn’t make Chrome win as when Chrome is opened so it becomes a RAM sucker..now that’s not my point of view only, its of many experts (Verge, Slant, etc) after a lot of diagnoses which turns system slow under multitasking (which 1 never wants). (+1B)

The clear answer is Brave Browser as it loads faster and loads only needed Java Scripts for the page to be seen not like Chrome which loads every Java Script.

This feature can have Advantages n Disadvantages both, a very few times Brave may not load some needed elements coz of this feature where Chome will, so both get equality here. (+1B/+1C)

Brave uses a Non-Tracking technology when someone uses the browser, as mentioned Brave has 2 kinds Private Tab options, one is simple Private Browser tab where second is its Tor Private Tab option. Tor itself stands for Anonymously if you are familiar with it, these security audits are missed in Chrome as it stores everything on its Database.

– it stays private, on your devices, until you delete it. Which means we won’t ever sell your data to third parties. (+1B)

Unlike Chrome which Stores Location, Logins, History, etc. Brave never stores it which enables worry-free surf, plus whenever possible, Brave automatically upgrades to HTTPS for secure, encrypted communications when an ordinary browser would use an insecure connection.

Also every Download, Bookmarks stored pages & everything is secured in an encrypted way with no access to Brave. (+1B)

Yes, Brave comes with Inbuilt AD Blocker without any need of extra Messi extensions. This makes a plus point for users but a minus point for Content creators as their Revenue cut down through this.

So here at this point, it comes on my wellness as well, No ADS means no revenue :(, still giving (+1B) as users point.

If you love Extensions then Congrats, Brave supports all those Extensions which are supported by Chrome, it has Chrome Web Store where you can find everything just like Chrome without any sacrifices, but it’s not guaranteed that it supports each n every extension but covers most out of it. (+1B)

Android//IOS it’s supported by both + PC, therefore, no issues whats in your Hand right now to Switch. (+1B/+C)

This means that here you can control if you want ADs or not, want to Block Java Scripts on your Browser n more. (+1B)

There’s also one thing called Brave Rewards (BAT) which is a kinda CryptoCurrency, not even this Brave itself supports Bitcoin, Etherium.(+1B)

Talk about -B Points vs -C Points, then Brave is the clear Winner with some disadvantages but more advantages.
Brave Points- 10 > Chrome Points- 2, so unfair 😛
I am personally using it as my regular Browser with ADs Enables because I value every creator’s work and respect their Earnings.

The similarity is that on both you can change Themes, can use Extensions & have to Sign I with Google Device only, if you wanna Try Now then Download Link – https://brave.com/

Welcome all, I am a Tech Influencer, Enthusiast, Blogger and YouTuber chasing my dreams and Goals also a Freelancer Photographer without any DSLRs but just Mobile Shots.Hope you may have a Great Day ahead, Thank You 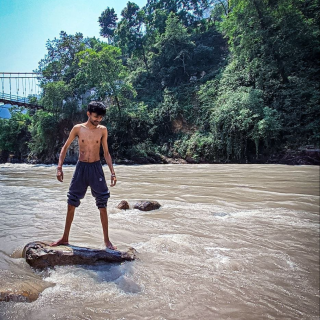 Tech Enthusiast, always in seek of new Gadgets, Hacks, Tricks, etc. Love each and every Tech Bake, still a Student finding Life with YouTube N Social Media. Nothing much to tell about, Pure Soul Love Dogs.